Islanding of 100% renewable energy microgrids is a specific sub-section of this business case, since batteries remain the central grid forming and supporting element of an islanded system. InterFlex examined the seamless transition between grid-connected and islanding mode, in order to increase the resiliency in specific locations (rural areas, islands), or in response to local initiatives (Local Energy Communities).

The implementation of combined services for the use of stationary batteries formed part of the French and Swedish demonstrators.

In the village of Simris in the south of Sweden, E.ON implemented a microgrid able to run in an islanded mode with 100% renewable generation: a wind turbine as main generation, supported by a ground-mounted PV power plant and two stationary batteries (Li-ion and Redox-flow technologies). The central battery system was in charge of the instantaneous balancing of the microgrid in islanded mode (voltage and frequency control). When connected to the main grid, the batteries offered ancillary services to the TSO including constraint management, peak lopping, and voltage control.

In the French demonstrator Nice Smart Valley, two different sites were equipped with batteries to test the multi-service approach, while depending on the nature of the service, either the DSO itself or market players (ENGIE) were operating the respective batteries. On Sainte Marguerite, a small Mediterranean island near the coast of the French Riviera, Enedis, ENGIE and Socomec implemented a microgrid with islanding capacities based on two batteries. A first battery was remote-controlled by Enedis from its Regional Control Centre and served to guarantee the electric system stability in case of islanding. A second battery was deployed by ENGIE primarily to provide self-consumption to local customers, whereas the battery also served to support the DSO’s battery during islanding operation.

In Carros, a municipality in the metropolitan area of Nice, Enedis and ENGIE shared the exploitation of a single battery for grid constraint management and collective self- consumption respectively. 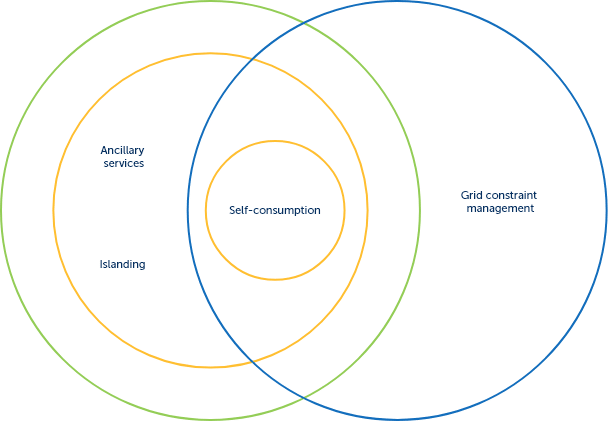 1. Seamless MV islanding by the DSO to reinforce the resilience of areas where power supply is critical

2 interconnected Battery storage systems: one microgrid-forming battery (owned & operated by the DSO for the demonstration):

1. Remote-controlled seamless MV islanding system for the DSO to ensure the continuity of supply in areas were no backup is provided by the grid

2. Contractual exploitation agreement with an aggregator for storage monetization outside islanding periods – ancillary services and one commercial battery (aggregator asset)

and one commercial battery (aggregator asset)

1. Grid-support to the DSO during islanding periods

2. Remote steered operation by the aggregator for ancillary services and markets

Shared & alternating use of a single battery by both the DSO and aggregator:

1. Local use of the battery by the DSO to relieve peak loads on the distribution grid

2. Battery state of charge optimisation by the aggregator to maximise the customer benefit in a collective self consumption operation: several customers make use of the same centralised battery

Multi-service storage and islanding can help to avoid the GHG emissions of fossil-fuelled gensets, by replacing them with local renewable energy that can be used to ensure electricity supply in case of an incident on the main network. Enedis and ENGIE explored potentially innovative business models including the shared use of a common battery for both commercial and grid services.

Among the achievements of the InterFlex demonstrators on multi-service storage and islanding shall be cited:

Remaining challenges include the following elements:

To subscribe to our Newsletter, please enter your name and e-mail address and we will keep you informed on all project news and main results.